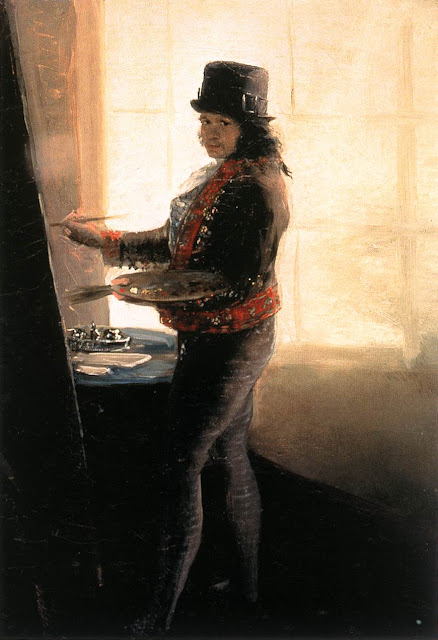 This is Fransisco Goya, most famous for Los Fusilamientos del Tres de Mayo 1808. I am thinking of buying a reproduction of this painting, mainly for its playfulness but also because of the following poem by American poet Billy Collins.

In most self-portraits it is the face that dominates:
Cezanne is a pair of eyes swimming in brushstrokes,
Van Gogh stares out of a halo of swirling darkness,
Rembrant looks relieved as if he were taking a breather
from painting The Blinding of Sampson.

But in this one Goya stands well back from the mirror
and is seen posed in the clutter of his studio
addressing a canvas tilted back on a tall easel.

He appears to be smiling out at us as if he knew
we would be amused by the extraordinary hat on his head
which is fitted around the brim with candle holders,
a device that allowed him to work into the night.

You can only wonder what it would be like
to be wearing such a chandelier on your head
as if you were a walking dining room or concert hall.

But once you see this hat there is no need to read
any biography of Goya or to memorize his dates.

To understand Goya you only have to imagine him
lighting the candles one by one, then placing
the hat on his head, ready for a night of work.

Imagine him surprising his wife with his new invention,
the laughing like a birthday cake when she saw the glow.

Imagine him flickering through the rooms of his house
with all the shadows flying across the walls.

Imagine a lost traveler knocking on his door
one dark night in the hill country of Spain.
"Come in, " he would say, "I was just painting myself,"
as he stood in the doorway holding up the wand of a brush,
illuminated in the blaze of his famous candle hat.

Sir Bob Bunbury
A blog for generally constructive purposes, for although the self is royal it hungers and thirsts like a pauper. These notes but whet its appetite and it soon returns to its abject state. However, a continuous stream of nourishment can sate and alleviate and this is what I aim to provide. Use what I have written, that's what it's for, but give credit where credit is due.

Sins of the Past

What I write about